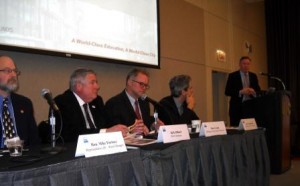 The “Best Practices in Regional Transit Governance” forum January 6 brought more than 100 transportation industry professionals together to gain insight from panel discussions and presentations.  A highlight was a presentation on a study on regional transit governance prepared by the Washington D.C. based Eno Center for Transportation in conjunction with the TransitCenter from New York.

During the forum, which was co-hosted by the Urban Transportation Center, the need to improve transit performance measurement standards and the equitable distribution and oversight of public funds for public transit agencies in metropolitan Chicago were among issues addressed by elected and appointed officials who participated in the half-day event.

Greater transparency from transit agencies and the value of reliable trains and buses to the local economy and job market were other topics discussed by the public-sector panel at a forum.

During the discussion titled, “Transit Governance in Metropolitan Chicago: Where Do We Go From Here?” panelist Illinois State Sen. Daniel Biss said the current transit service 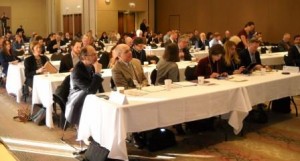 board structure leads to regional conflicts, adding that governments need to build greater awareness for the value of public transit in today’s society. Dan Cronin, Chairman of the DuPage County Board, noted that lawmakers should explore more equitable policies for transit funding distribution, citing that parts of his county have large numbers of job corridors that could benefit for enhance public transportation.

Regional Transportation Authority (RTA) Board Chairman Kirk Dillard said the RTA instituted a strong policy of transparency to help build collaboration among service boards and stakeholders. And, Illinois State Rep. Mike Fortner pointed out the challenges in establishing transit metrics in populated suburban metro areas like Aurora-Naperville, which has a population equal to Omaha.  The panel was moderated by David Bragdon, executive director of TransitCenter.

Transit experts debated the value of public transit in attracting new business, the need for a coherent strategy between Chicago transit agencies and the public sector and the role of transit in the overall transportation network. 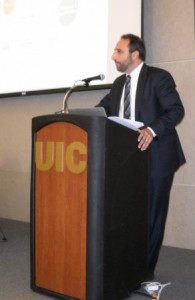 The discussion, themed “Will a Change in Governance Really Make Chicago Regional Transit Better?” also addressed the role metropolitan planning organizations play in regional transit governance and ways to optimize Chicago’s regional governance structure in order to improve the public transit system. Regarding the availability of funding for expanding or repairing local transit, it was noted that money alone will not be sufficient; cooperation between government and transit agencies is needed to ensure success.

These transportation professionals comprised the panel:

The opening presentation of the forum, “How Did We Get Here? A Brief History of the Evolution of Chicago’s Regional Transit Governance,” was delivered by Schlickman. In his talk, Schlickman addressed the formation of the RTA, the establishment of new transit funding policies, structural reforms implemented and more recent legislative action enacted regarding RTA funding.

Joshua Schank, President and CEO of the Eno Center for Transportation, followed with an overview and analysis of the report, “Getting to the Route of it: The Role of Governance in Regional Transit.” The report, completed in 2014, analyzed the transit systems and governance structures in six major U.S. metro areas, including Chicago